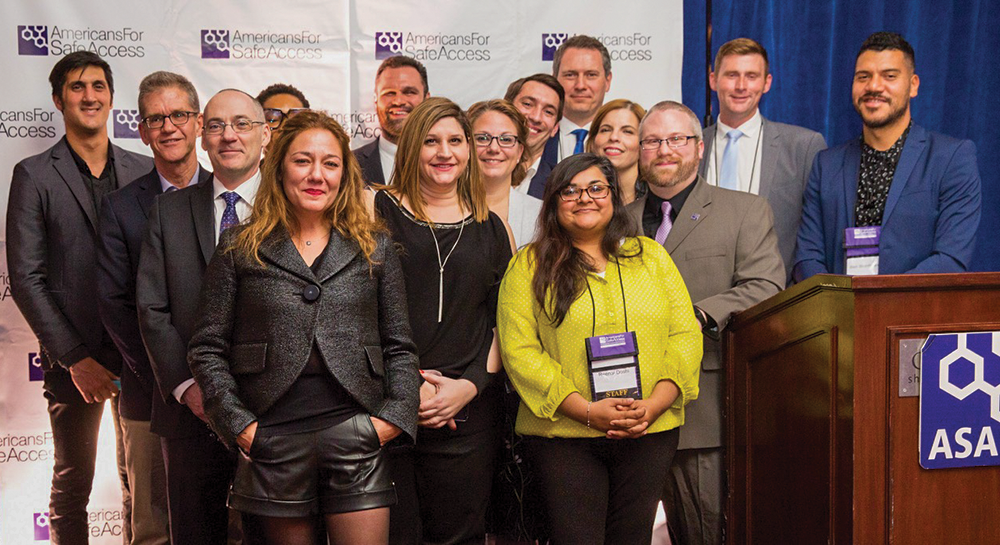 In the not-so-distant past, the use of medical cannabis was not only socially unacceptable but also thoroughly illegal. In those early days, the need for patient advocacy was vital, and Americans for Safe Access (ASA) was among the most outspoken advocates. The conversation has evolved rapidly in the past decade and beyond, but because there’s a lingering stigma that affects access, ASA continues to be one of the loudest voices speaking out for patients’ rights.

Founded in 2002 by Steph Sherer, the Washington, D.C., member-based nonprofit organization advocates for safe and legal access to cannabis for therapeutic uses and research. It works with a grassroots base of more than 100,000 members nationwide to effect change through public education and direct advocacy at the local, state, and federal levels. After 17 years, Sherer has stepped down to pursue a career in Europe as president of an organization she helped found in 2015, the International Cannabis and Cannabinoids Institute—a collaboration of patient advocates, scientists, and New York–based investment company Dioscorides Global Holdings.

Today, ASA is helmed by Debbie Churgai, who previously had written, edited, and reviewed many of the organization’s publications. Churgai got her start in the medical cannabis field by helping a company write its state license applications for cultivating and manufacturing medical cannabis. She joined ASA in 2016 as the executive assistant to the executive director and quickly worked her way up to managing programs.

We recently caught up with Churgai to learn more about what clinicians should know about the changing climate of medical cannabis since ASA’s inception, some of the most pressing issues requiring attention today, and available resources.

Advocating for Safe and Legal Access
The landscape of medical cannabis has been transformed since ASA was formed in 2002, when the nation’s 11 dispensaries were all located in California and operating illegally. The organization, she says, was created so patients could buy their medicine legally in safe places. “Now, we have 47 states with some form of a medical cannabis program. Bear in mind 12 of these states allow CBD only. However, while the acceptance of medical cannabis has grown, we’re finding that many patients are still not able to access this medicine due to regulatory restrictions such as condition-specific requirements, lack of medical professional education, and cost. And we still do not have required standards for testing and safety.”

ASA has provided legal training and medical information to patients, attorneys, health and medical professionals, and policymakers throughout the United States. It also organizes media support for court cases, rapid responses to law enforcement raids, and capacity building for advocates. “We’re not just advocating for passing a law; we’re advocating for safe and affordable access for everyone—not just those who are lucky enough to have a specific approved condition, live in an area that has a dispensary they can travel to, or can afford their medicine. ASA is about teaching people how to become their own advocate. Not only do we have a full advocacy training center, we have chapters around the country that help people come together to advocate for what’s important in their states.”

The organization has created a vision for what safe access should look like as well as the legal framework to support that vision through the passage of state and local laws and through numerous court battles.

Cannabis, according to the ASA’s criteria for safe and legal access, not only must be acknowledged as a legal medicine by state, federal, and international laws and regulations and be covered by insurance but also must be part of clinicians’ toolkits, offered to patients as first-line or complementary treatment options. And in order for medical professionals to confidently make such recommendations and for patients to make reasoned decisions, adequate, reliable information must be available. To ensure safety, medicine labels must assure consumers that the products don’t contain pesticides and other contaminates. And finally, patients and clinicians need to be able to personalize treatment regimens using a range of products and delivery methods.

Not just focusing on local concerns, ASA looks beyond the United States and has a global reach.

According to Churgai, current international policies on cannabis are severely outdated, to the detriment of patients worldwide. Cannabis is currently classified in Schedule I and IV of the United Nations (UN) Single Convention on Narcotic Drugs of 1961. In order to change the outdated scheduling of cannabis, the UN General Assembly must rely on a recommendation from the UN Commission on Narcotic Drugs (CND).

“This year, the World Health Organization recommended that cannabis resin be removed from the Schedule IV of the Single Convention on Narcotic Drugs,” Churgai says. “This is different than the US Controlled Substances Act scheduling. If these recommendations are adopted by the UN, this could embolden countries to legalize medical cannabis worldwide. The CND will convene for a historic vote on the rescheduling of cannabis in March 2020. The CND’s decision will have a far-reaching impact worldwide for many years to come.”

ASA, Churgai says, is also “moving toward making a greater impact internationally through our International Medical Cannabis Patient Coalition (IMCPC).” The IMCPC is the largest coalition of medical cannabis patient organizations across the world and was formed in 2015 during the “Medical Cannabis and Cannabinoids: Policy, Research and Medical Practice” conference in Prague to increase access to safe cannabis for patients worldwide. IMCPC member countries include Bulgaria, Canada, the Czech Republic, Estonia, France, Israel, Italy, Latvia, Poland, Slovenia, Spain, the United Kingdom, and the United States.

Transforming Medical Education
According to Churgai, ASA is focused not only on changing laws but also on helping the industry create a safe environment for patients as well as on educating patients and doctors. “Overall, the most pressing issue now is education. That includes education for policy makers but also education for medical patients and medical professionals.”

While doctors are the gateway to patient access, many are not adequately informed to fulfill that role. “Every patient in the country must have a doctor recommendation to be eligible to receive medical cannabis,” Churgai says. “However, doctors do not feel comfortable talking with their patients about cannabis because they did not learn about it in medical school.”

Through these courses, which are accredited not only for physicians but also for nurses, nurse practitioners, pharmacists, and psychologists, clinicians can learn about the endocannabinoid system and cannabis as medicine.

ASA also hopes to enlist physicians to play a role in its lead campaign, End Pain, Not Lives, which, Churgai explains, “works to make cannabis an option for pain treatment in order to help with the opioid epidemic. We would love for more doctors to get involved and help move this campaign forward.”

Educating Consumers
Because informing consumers is an equally significant part of ASA’s mission, it recently released The Patient’s Guide to CBD, which Churgai describes as “a comprehensive resource that covers a wide range of topics including available forms for use, what to look for on package labels, how to read a certificate of analysis, how CBD interacts with the endocannabinoid system, the current state of research, the compound’s legal status, and how to talk to one’s doctor about CBD.”

In addition, she says, the organization’s State of the State report was released in early August. “This report reflects a complete analysis of medical cannabis programs across the United States in an effort to objectively evaluate how those programs serve patients. This year’s report will also include a focus on the opioid epidemic and how each state is helping to combat it through their medical cannabis programs.”

Like all the resources on ASA’s website, all of the reports are available for free download. “Along with CME courses for medical professionals and education for patients and caregivers,” Churgai says, “our CCC website (www.cannabiscarecertification.org) includes legal information by state, so medical professionals and patients can look up what the specific state laws and regulations are where they live.”

Getting Involved
Although ASA’s advocacy and education efforts have made many inroads, there’s a long way to go, and the organization continues to work tirelessly toward its goals of safety and access. To learn more about its efforts and become involved, visit safeaccessnow.org.

— Lindsey Getz is an award-winning freelance writer based in Royersford, Pennsylvania.