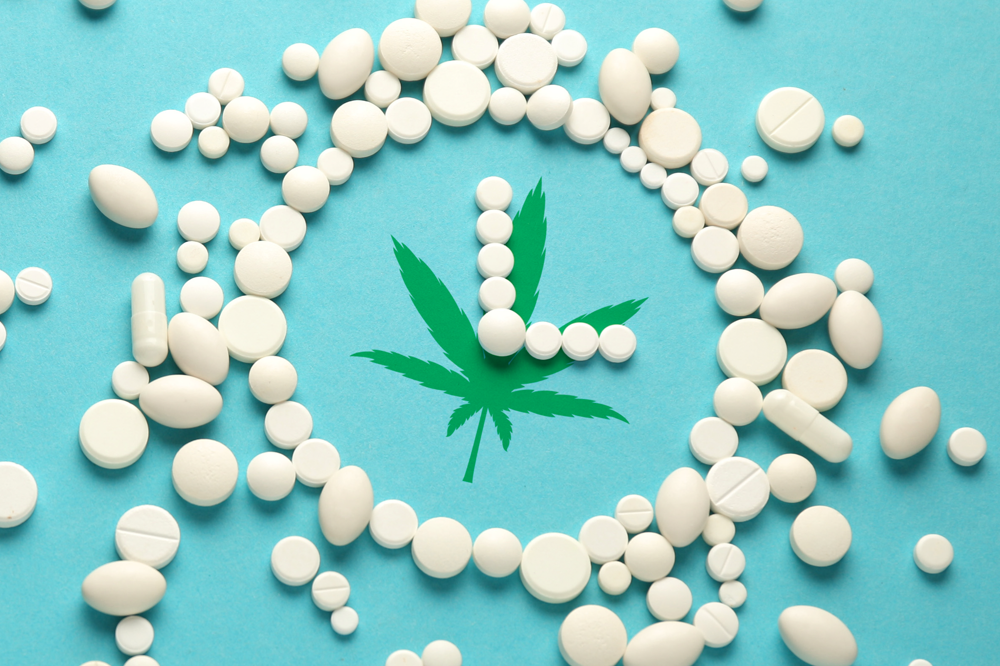 Medicinal use of the plant Cannabis sativa can be traced roughly 5,000 years back to ancient China, where extracts were used for relief of cramps and pain.1 Today, there’s increasing evidence supporting the use of cannabinoids for a number of clinical conditions including pain, epilepsy, inflammatory disease, anorexia, sleep disorders, and symptoms associated with multiple sclerosis, schizophrenia, and other diseases and disorders. As the legalization of medicinal cannabis and its related constituents expands and their use becomes more widely accepted, cannabis companies are developing a number of sustained-release (SR) cannabis formulations that promise more timely relief.

Cannabis Pharmacology
Cannabis consists of more than 500 compounds with at least 113 cannabinoids identified in addition to other components such as terpenes and flavonoids.2 The term “entourage effect” has been used to describe how these constituents work together synergistically to modulate the pharmacological effects of cannabis.3

THC is believed to be the primary constituent responsible for the intoxicating effects of cannabis. THC’s interaction with the nucleus accumbens leads to the euphoria or high commonly associated with cannabis use, while its interaction with CB1 in the hypothalamus helps increase appetite. THC also has positive effects and is both an anti-inflammatory and neuroprotective antioxidant, largely due to its activation of CB1 receptors in the pain-control area of the brain.5

CBD displays very low affinity for CB1 and CB2 and lacks the intoxicating properties of THC. CBD acts on serotonin 5-HT1A receptors and transient receptor potential vanilloid type 1 receptors, in addition to possibly having neuroprotective benefits resulting from antioxidant and anti-inflammatory properties. CBD may have a therapeutic role in the treatment of pain and inflammation and for the relief of a number of neurological disorders such as epilepsy and seizures, psychosis, anxiety, movement disorders (eg, Huntington’s disease and amyotrophic lateral sclerosis), and multiple sclerosis.6

The ratio of THC to CBD of cannabis products is especially important because CBD may have a protective effect against certain negative psychological effects from THC such as cognitive impairment, anxiety, and paranoia.5 This can be significant, as CBD offers its own set of benefits while also allowing tolerance of increased doses of THC.7 In some cases, CBD also may directly enhance THC’s positive effects. For example, CBD may synergize and even enhance THC-induced pain relief.6,7

Oral Cannabis Formulations
With the growth in legalized cannabis, there’s been a significant increase in the types of cannabis/cannabinoid products available, extending well beyond preparations of dried cannabis plant flowers and cannabis resin (hashish). Commercially available products for retail purchase now include a large number of edible products, oils and tinctures, extracts, and transdermal products. Surveys of medical cannabis users indicate that 16% to 26% of medical cannabis patients use edible cannabis products, and these products comprised an estimated 40% of medical and nonmedical retail cannabis sales in Colorado in 2014.8

Edibles may be popular not only because some patients dislike smoking but also because they have a longer duration of drug effects, reduce exposure to harmful byproducts (eg, carcinogens), are perceived as being safer, and allow cannabis to be used more discreetly than with smoking.

Compared with the large selection of edible cannabis products, the number of capsule/tablet formulations has been limited. However, as the use of cannabis and cannabinoid products expands, there’s significant interest by a number of cannabis companies to develop new oral formulations that may provide additional advantages, including the following:

Dronabinol is indicated for patients with chemotherapy-induced nausea and vomiting who haven’t responded to conventional antiemetic therapies and for treating anorexia associated with weight loss in AIDS patients. Marinol and its generic counterparts contain synthetic THC formulated as a sesame oil solution supplied in a soft gelatin capsule. Dronabinol is an immediate-release formulation that, for chemotherapy patients experiencing nausea, requires dosing orally every two to four hours for a total of four to six doses a day, which can result in patient noncompliance. The use of dronabinol capsules is contraindicated in patients with known hypersensitivity reactions to sesame oil.9

Because dronabinol is a pure synthetic version of THC, patients often experience a high when taking the medication. Since dronabinol products contain only THC without the other cannabinoids found in natural cannabis, there’s a lack of their associated benefits, including the ability of the other cannabinoids to help temper the negative psychoactive effects of THC; this needs to be factored into the decision to use the product long term. Possible side effects include drowsiness, dizziness, nausea, vomiting, clumsiness, and trouble thinking clearly.9

Nabilone (Cesamet) is a synthetic THC derivative that’s crystalline in nature and is filled into a hard gelatin capsule. Nabilone capsules are indicated for the treatment of nausea and vomiting associated with cancer chemotherapy in patients who have failed to respond adequately to conventional antiemetic treatments. Its use is restricted to such patients because a substantial proportion of any group of patients treated with Cesamet can be expected to experience disturbing psychotomimetic reactions not observed with other antiemetic agents. Because of its potential to alter the mental state, Cesamet is intended for use only under circumstances that permit close supervision of the patient by a responsible individual, particularly during initial use and during dose adjustments.11

Nabilone capsules contain 1 mg of active ingredient. Nabilone is dosed 1 or 2 mg by mouth twice daily. The initial dose should be given one to three hours before the chemotherapeutic agent is administered. A dose of 1 or 2 mg given the night before chemotherapy administration may be useful. Nabilone may be administered two or three times daily during the entire course of each cycle of chemotherapy and, if needed, for 48 hours after the last dose of each cycle of chemotherapy.11

Epidiolex CBD oral solution is used to treat seizures associated with two rare and severe forms of epilepsy, Lennox-Gastaut syndrome and Dravet syndrome, in patients 2 years of age and older. Epidiolex is the first FDA-approved drug that contains a purified drug substance derived from cannabis. It’s also the first FDA approval of a drug for the treatment of patients with Dravet syndrome.12

SR Products
Cannabis-based products are widely used to treat a number of chronic conditions including pain. One of the challenges associated with most of the current methods of administration, including tablets, capsules, and smoking, is that the products must be dosed frequently, in some cases every three to four hours, in order to provide adequate relief. To better meet the needs of patients and the marketplace, a number of cannabis companies are working on innovative SR formulations with standard doses to allow reduced dosing frequency, increase compliance, and improve around-the-clock benefits for patients suffering from chronic conditions.

In 2018, Columbia Care LLC introduced two patent-pending extended-release (ER), hard-pressed tablet formulations both aimed at management of chronic illness. The first was a high-THC ER tablet followed by a high-CBD ER formulation. These ER tablets are designed to provide long-lasting release of medication to help patients with conditions including neuropathic pain, systemic inflammation, anxiety, seizures/epilepsy, and muscle spasticity. Their goal is to allow patients to experience long-lasting relief of symptoms using a simple, familiar, and highly effective method of administration. The tablets are prescored for splitting to permit additional titration and dosing options.13

Cannabics Pharmaceuticals, an Israeli American company, has developed a revolutionary technology with which to put the medicinal compounds of cannabis into an SR capsule in standardized doses. Cannabics SR is designed to provide 10 to 12 hours of steady therapeutic effects and is used as a palliative pain treatment for cancer patients. The product was developed based on an unmet need for a better oral administration route, standardization and reproducibility of the dosage, and prolonged release of medication.14

The company website notes that “while the medicinal effects of certain cannabinoids are well known to physicians, it’s common knowledge that smoking is hazardous to health. Many physicians are perfectly aware of the palliative properties of cannabis (eg, antiemetic and analgesic); however, they refrain from recommending it to patients knowing that smoking the raw flowers is still the most common and available administration route. Hence the availability of an oral, standardized, reliable, and clinically tested administration route of medical cannabis—no different from the administration route of most medications consumed by patients today—would dramatically improve the availability of medical cannabis therapy to patients in need.”14

Cannabis SR, as defined by the National Institutes of Health (NIH), is an oil-based oral capsule composed of a cannabis extract that contains a variety of cannabinoids but mainly comprises THC with potential anticachectic and analgesic activities. When taken orally, the cannabinoids bind to the cannabinoid G-protein coupled receptor CB1, which is located in both central and peripheral neurons; the CB1 receptor activation inhibits adenyl cyclase, increases various signal transduction pathways, and modulates the activity of various ion channels. This provides an analgesic effect, increases appetite, decreases chemotherapy-induced nausea and vomiting, and improves weight gain. Overall, the SR form is associated with immediate release of cannabinoids and quick onset of action, followed by a gradual release of cannabinoids. Per the NIH, this form facilitates longer-lasting therapeutic effects and causes fewer intoxicating side effects compared with non-SR cannabinoid-containing oral formulations.15

Canadian company Canntab Therapeutics is developing a product line of hard pill formulations for a variety of cannabinoid and terpenoid blends. The company has more than 13 patents pending in Canada and the United States covering proprietary processes and solid oral dose formulations for a variety of cannabinoid and terpenoid blends for ER, immediate release, flash melt (rapid oral disintegrating), and bilayered medications. The product line has been developed to provide doctors, patients, and consumers with a medical-grade solution with all the features expected from any prescription or over-the-counter medication. Whereas smoking cannabis can result in a large initial dose followed by a precipitous drop, and edibles are slow to start working with unpredictable durations of effects, the company’s ER tablets with flash melt technology are designed to bring drug levels into therapeutic window and maintain that dose for an extended period of time.16

As the medicinal use of cannabis continues to expand at a rapid pace, the development of new and innovative cannabis dosage forms can be expected to meet the changing needs and demands of patients and cannabis health care professionals.

— Mark D. Coggins, PharmD, BCGP, FASCP, is vice president of pharmacy services and medication management for skilled nursing centers operated by Diversicare in 10 states and is a past director on the board of the American Society of Consultant Pharmacists. He was nationally recognized by the Commission for Certification in Geriatric Pharmacy with the 2010 Excellence in Geriatric Pharmacy Practice Award.

4. Goodman N. An overview of the endogenous cannabinoid system: its components and possible roles of this recently discovered regulatory system. The Vaults of Erowid website. http://www.erowid.org/plants/cannabis/cannabis_pharmacology2.shtml. Updated February 20, 2015.

7. National Academies of Sciences, Engineering, and Medicine. The health effects of cannabis and cannabinoids: current state of evidence and recommendations for research. https://www.nap.edu/read/24625/chapter/1. Published 2017.